The big voice the muscular guitar the masterful storytelling are once again used to great effect on this bold and brilliant work that delivers up a powerful new batch of songs that bristle with energy and originality. Back from Mississippi and with an eye on Australia the former Queensland Songwriter of the Year touches on everything from indigenous issues to old Australian folk songs, deaths on the roads, blue childhood days, environmental musings, menopause, relationship breakdowns and recalibrations and even a little lullaby for poor old mother earth. 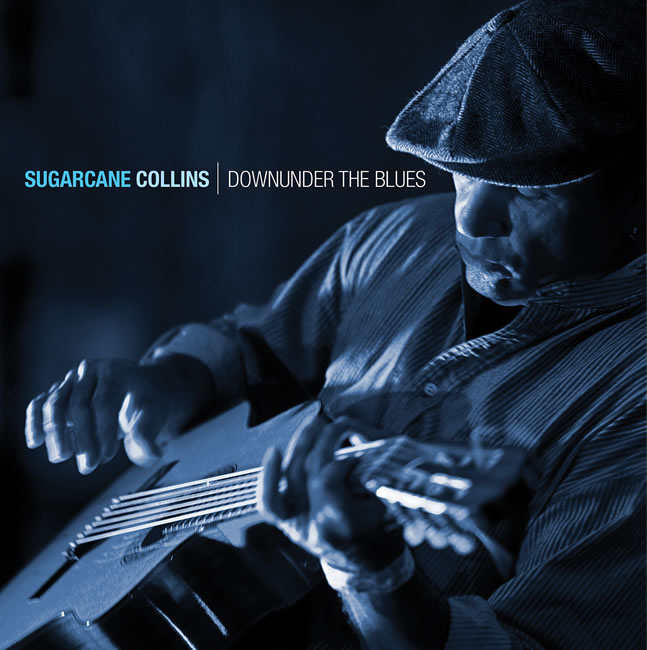 “Along with harmonica/didgeridoo practitioner Harper, there is no finer contemporary Australian interpreter of the blues than Sugarcane Collins. On this, Collins’ fourth original album, the journeyman guitarist delivers a raw masterstroke of folk-infused musings. Sugarcane Collins’ silver-tongued one-man narratives feel assured and his songs convey a universal authenticity”.
Mark Uricheck, LIVING BLUES, USA

“On this long-awaited follow-up to his acclaimed 2006 title Way Down The River, well-travelled far north Queensland-based blues troubadour gets back to the concept of blues from a distinctly Aussie perspective. Downunder the Blues is a well produced CD showcasing Collins’ imaginative songwriting, sonorous voice and agile guitar picking. His narratives framed in various blues styles from Delta to ragtime and Piedmont, Collins is an aussie master of the country blues”.
Al Hensley, RHYTHMS, Australia

“Sugarcane Collins gave the blues genre the masterpiece Way Down the River which was set in the Mississippi Delta of the 1920s and 30s, and on Downunder the Blues he has continued with his sublime storytelling, innovative arrangements and pristine production”.
Rainey Wetnight, BLUESBLAST, USA

“I love your guitar work but I think your voice is the album’s best feature , it has a real strong presence about it”.
Duncan Smith, TOP SHELF MUSIC 89.7FM

“Downunder the Blues is a different to your last release and there are many fine tracks. I played Berry’s Creek Dreaming and had a really good listen to it. The way you placed your own personnel experiences into that song was outstanding.”
John Klose, Bay FM 100.3 Blues by the Bay

“What a great album! I listened to all the tracks and I can pretty much use each one for my radio show”.
Hugo P, Swinging the Blues Radio 2RDJ FM 88.1

The Blues Downunder
one time in the USA an african american asked me how the aborigines were doing. I had to tell him – not real good. It got me to thinking – so I bluesified an old convict folk song Jim Jones at Botony Bay added some monologues addressing the plight of indigenous australians and came up with the blues downunder.

Click Go The Shears (850KB)
reinvented as a delta blues

Some Fool Done Stole My Mojo (894KB)
I was living in brisbane and the house got burgled. guitars, cameras and my little mojo bag were stolen. stealing a mojo? What kind of fool does that!

It’s A Mystery (1MB)
put another way – menopause is a pause on men.

Berry’s Creek Dreaming (1.01MB)
my mate peter up on the pascoe said “that’s your dreaming Collins. you should include it”. so l did

Line In The Sand (1.05MB)
a two part song about taking. first part is someone taking from me personally the second about humanities’ relentless taking from mother earth