The grand daughter of one of the original Afghan cameleers,
Janette Collins has outback adventure and campfire cooking in her blood.
She spent her childhood years in South Australia accompanying her father Mick on shooting trips to keep the family fed on kangaroo, rabbit, duck – and all those nights out under the stars beside a blazing campfire instilled in her a deep love of the bush and a thorough understanding of how to turn wild and store bought ingredients into delicious plates of food with minimum fuss and minimal equipment! 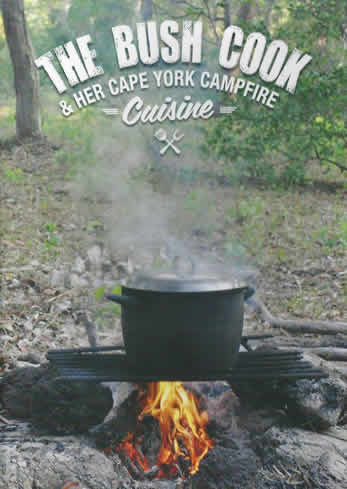 Take a two week trip from Cairns way up north to Cape York n back
with Janette Collins and see how she caters for her family and friends.
This is real homestyle bushcooking in the real deal Australian bush.

Coq Au Vin – a succulent chicken and red wine stew with dried mushrooms, bacon and a dash of brandy.

McKinvens Pig – delightfully slow roasted side of pig on top of an old wood stove, basted with soy sauce and honey and accompanied by curried vegetables and steamed rice.

Trevally & Queenfish – down to the mouth of the Pascoe River
roasting freshly caught trevalley and queenfish whole on the coals
with spicy – Thai style bream on the side.

Steamed Puddings – variations on the theme of steamed puddings –
a tasty date and nut slice, a rich moist chocolate cake.

Pan Fried Fillets of Trevally – with a cabbage and apple and onion
Cape York coleslaw, and boiled potatoes on the side.

BFC (Bush Fried Chicken) – back to Cooktown for fried chicken smothered in the bush cooks own sumptuous secret gravy. 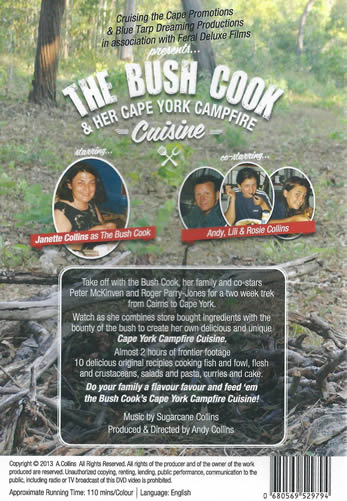 Just like her nomadic grandfather who helped pioneer the network of camel
pads, trails and tracks that later became the main roads across the outback Janette has travelled far and wide around Australia and around the world.

Settling on Cairns as her home base in the sixties she has turned her hand
to all manner of employment – jillerooing at Lakeland Downs, a stint with
the public service, her own pizza and pasta restaurant at Yorkey’s Knob,
a year in Brisbane chefing at GAMBARO’S in Caxton Street and even completely retraining and becoming a nurse.

But whether she be camping on river banks or ocean fronts, camel trekking in Morocco, sipping coffee in Mexico or kicking back in Cairns, her main focus has always been family,friends and food. She has three daughters – Simone, Rosie & Lili – two grandchildren – BiBo & Indigo – and a husband Andy.

In Australia this DVD can also be ordered at all good record stores through
ONLY BLUES MUSIC Distribution.