With a stellar cast of the north’s best musicians past and present, Sugarcane has created a double album bursting with originality and energy and colour that reflects his 40 years way up north.

There is a strong personal narrative humming through these songs and more than any other local Queensland songwriter, the catalogue of material on this album incisively and poetically unravels the landscapes and characters of the far north.

This album includes a Bonus DVD Video of his award winning song  Pascoe River and introducing for the very first time on film, his wife  Janette Collins, The Bush Cook and her Cape York Campfire Cuisine. 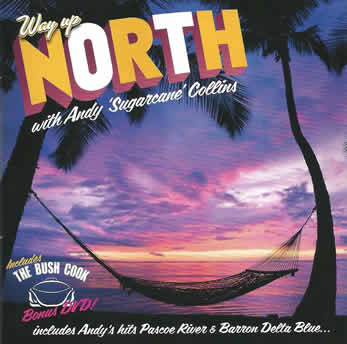 You are the first recording artist I know of to really capture
the spirit of Queensland in your music.
Gavin Miller, Brisbane

Collins has a voice as smooth as an ocean breeze.
Fred Kraus, minor 7th.com USA

It is an exotic mix. What Jimmy Buffet does for the Gulf Stream
waters of Florida, Collins does for Cairns, Cape York and beyond.
Noel Mengel, Courier-Mail, Brisbane

The video clip of Pascoe River/The Bush Cook is fantastic
and worth the price of the CD by itself!
James Walker, The Sunday Journal, Kankakee, Illinois, USA

It is a pleasure to listen to your new album.
The video clip of Pascoe River/Bush Cook is amazing.
Xavier Boulanger,Radio Albi, France

The album is great! A nice mix of styles.
The bonus DVD is also a great idea.
Brendan Dowd, Internet Radio, Scotland

I love how you put those Australian influences in your style.
Great stories behind the tunes too.
Marc Frijlink, Radio DJ, The Netherlands

WAY UP NORTH
I went north in the 70’s as a young man looking for a new life. Bingo!
I love this big old country surrounded by the sea, it’s a big red hearted country it’s a big big family, I love her boundless beauties and all her possibilities, but I’ve made my stand I’ve made my home, it’s way up north for me!

ROADTRAIN
On a trip around Australia many years ago l kept noticing these road signs saying BEWARE VEHICLES UP TO 50 METRES LONG. By the time l had reached Broome l had started singing to myself, going to ride a train from Bamaga to Broome.

GULF ROAD
The flood plains of the Gulf of Carpentaria were always going to be a tough call when it came to white settlement and this is a reminder of the hardy anglo saxon / anglo celtic pioneers who gave it a go. Mostly they lost their battle with the land and the crows picked their bones.

PASCOE RIVER
The Pascoe River is about 800 klms north of Cairns on the east coast about
150 klms south of the tip of Cape York Peninsula. For more than twenty years l have had a shack up on the Pascoe and l have lived every line of this song from sitting in a tinnie at the mouth of the river to sitting with the songmen Wolfie and Joe Blow Pascoe of the Kuuku Ya’u tribe (pronounced cookie ow) who are the traditional owners of the land where my little shack is situated.

THE BARRAMUNDI KID
Steve Rudken, from Innisfail, wrote this one about his brother Gilbert, the barramundi kid. I first heard this song when Steve sang it at the 1983 Charters Towers Country Music Festival. This is pure far north Queensland culture at its finest. l have been singing it all around the world ever since.

FRANCIS GABRIEL LAM
About a chinese swagman l used to see around the streets of Cairns back in the 80s. It is still a crime in this country to not have any money. It is called vagrancy. Back then the Court Report shame file was always published in Tuesday mornings Cairns Post and Stuart Creek is the prison down in Townsville.

MICHAEL’Tarzan’FOMENKO
In 1955, at the age of 24, Michael Fomenko the son of Princess Machabelli, a member of the pre- revolutionary Russian aristocracy, left Sydney and headed to the far north to realise his dream of living in the jungle. Killing crocodiles and wild pigs with only a machete, living with aborigines in remote Cape York, paddling his dugout canoe from the Daintree River to the Torres Strait and countless other adventures, Michael is legendary for his amazing exploits in the deep jungles of the tropical far north and is truly Australias own real life Tarzan.

BARRON DELTA BLUE
Back in the old days when the cane was burnt before it was cut there was nothing quite as spectacular as a drive down the Freshwater Valley on a cool winters night when the cane season was in full swing and the sky was ablaze. And the pub in Stratford used to rock!

I FOUND LOVE
I found love in Cairns and have a wife and three children to prove it. Believe it or not l met my wife on my very first night in Cairns and all these years later we are still together. Check out the Bonus DVD and
you willl get to meet her too!

LAKE STREET SERENADE
This is my ode to the languid lotus eating lifestyle of the tropical far north. Lake Street is one of the main streets in the city of Cairns.

SWINGING IN THE TREES
This song is about the dark side of paradise and refers to locals going troppo in the wet, man eating crocodiles in the Daintree River, suicide at Cape Tribulation and the dangers in the streets of Cairns late at night.

FLOWERS BY THE ROADSIDE
I saw a lonesome little tin cross nailed to a wooden stake beside the road a bit south of Mackay with just our beloved johnny painted on it with house paint – it is gone now – but l always think of him when l go driving by.

ROUND THE COUNTRY
As a travelling musician you might say this one is my ode to the road. Every year l spend 3 to 4 months touring the east coast from Cairns to Tasmania and back – and that is a long long long long way!

Produced and Mixed by Jimmy Mann

In Australia you can also order this album at all good record stores
through ONLY BLUES MUSIC Distribution.